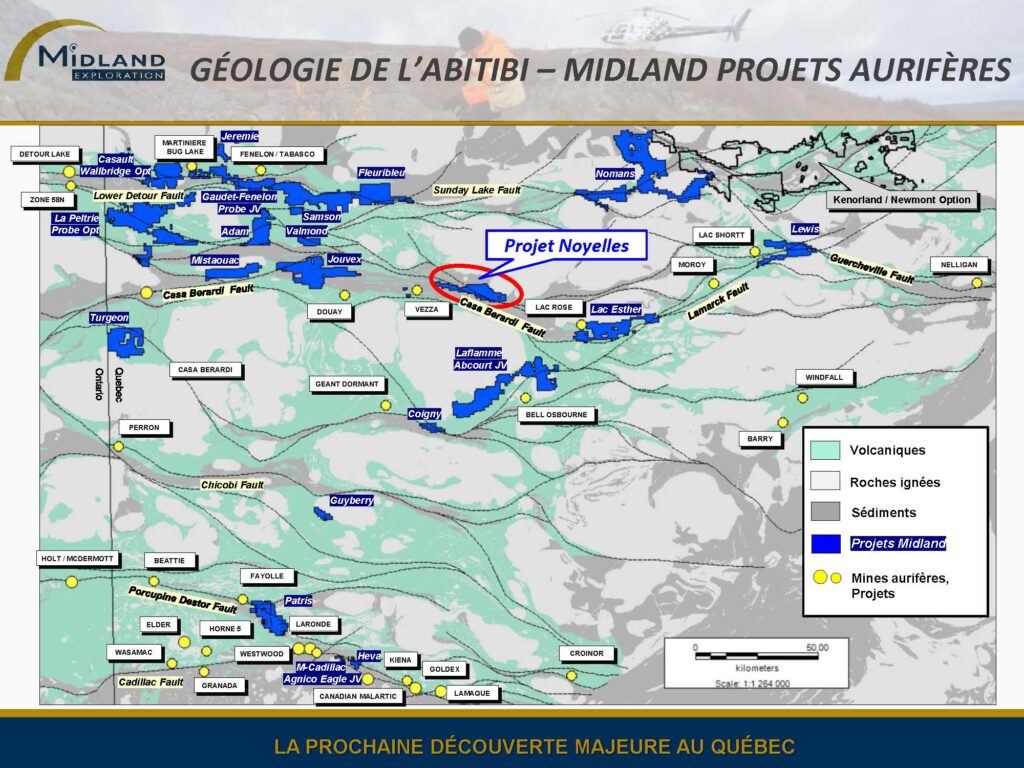 The Noyelles project is located approximately 20 kilometres south of the town of Matagami, Abitibi, Quebec.

The property consists of 172 claims covering a surface area of about 96 square kilometres.

Control over more than 30 kilometres of structures with strong gold potential, within and proximal to the northern contact of the sedimentary Taibi Group along the Casa Berardi deformation zone and hosted in the southern part of the Taibi sediments, along the Douay-Cameron deformation zone.

Located approximately 8 kilometres northeast of the Vezza gold deposit, held by Nottaway Resources Inc. and hosted in the southern part of the Taibi sediments, along the Douay-Cameron deformation zone.

Felsic intrusion, approximately 4 kilometres long, lies near this contact causing a structural complexity and potential gold traps associated with low-pressure zones along the lateral extensions of the intrusion.

Few historical gold occurrences are reported near this contact:

More than 30 years of experience in mineral exploration in Quebec.

Mario Masson holds a Bachelor’s degree in Geology from the Université de Montréal. Before joining Midland’s team, Mario worked several years has a geologist at Nipadex and Muscocho. In 1990, he started working for Noranda Exploration in Matagami has a Project Geologist and was a part of the team that found the Orchan West and Bell Allars deposits. He was also involved in the discovery of the Perseverance deposit in the Matagami Mining Camp in 2000. After this discovery, Mario and his team win the PDAC Bill Dennis Award in 2001. From 2002 to 2007, he was in charge of the exploration activities in the Noranda Mining Camp has a Senior Geologist for Noranda Inc – Falconbridge ltée – Xstrata Copper. In addition, he was also involved in the discovery of the West Ansil deposit in the Noranda Mining Camp in 2005, which allowed the Falconbridge ltée exploration team to win the Prospector of the Year award at the QMEA. Since January 2008, he is a part of Midland Exploration team as VP Exploration.

Gino Roger has been President and Chief Executive Officer of the Company since November 1, 2006. Mr. Roger has graduated as a geological engineer from Laval University in 1990. From May 1990 to October 2006, Mr. Roger was a Project Geologist, Senior Geologist and Regional Geologist for Xstrata, Falconbridge and Noranda. During those years he was actively involved in the generation, acquisition and negotiation of many significant projects and discovery of mineral deposits. He worked in Quebec, Ontario, B.C., Yukon and Sweden on a wide variety of projects involving gold, VMS, SEDEX, MVT, and IOCG ore deposits. Mr. Roger and his team received the AEMQ’s prestigious Prospector of the Year Award in 2005, for the discovery of the West Ansil deposit. He is a member of the Ordre des ingénieurs du Québec and of the Canadian Institute of Mining, Metallurgy and Petroleum. He is a director of the Quebec Mineral Exploration Association.

Chairman of the Board

Jean-Pierre Janson joined Richardson GMP in January 2005 as Managing Director, National Wealth Management. As such, he oversees the development of branches nationwide, and seeks new opportunities to bring some of the industry’s Top Investment Advisors to the firm. In addition, Mr. Janson also serves on the Richardson GMP’s executive committee and in that capacity works closely with the Executive Management Team on the firm’s strategic direction.

Mr. Janson was previously Managing Director of CIBC Wood Gundy Financial Services (Eastern Canada Region) and held senior management positions with both Merrill Lynch Canada Inc. and Midland Walwyn Inc. Having built a reputation of trust and respect during more than 30 years in the financial services industry, Mr. Janson continues to demonstrate his involvement through Richardson GMP Limited. He also serves as trustee of BTB Real Estate Investment Trust and as member on the board of Tri-Origin Exploration Limited.

René Branchaud holds an LLB from Université Laval obtained in 1982. He has been a lawyer since 1983 and is a partner of the law firm Lavery, de Billy L.L.P. He has a vast experience as secretary and director of mining corporations.

Ingrid Martin holds a Bachelor in Business Management from the École des hautes études commerciales (HEC), in Montréal, Quebec. She is a member of the Order of Chartered professional accountants of Quebec since 1990 and possesses a vast experience as consultant for public companies. She acts, also, as Chief Financial Officer of Vior Inc. Mrs. Martin is devoting 40% of her time to Midland Exploration.

Paul Archer has a Bachelor’s degree in Geological Engineering and a Master’s degree in Earth Science. He has more than 35 years of experience in the mining industry, particularly in exploration for gold and base metals in Archean terrains. He developed his expertise working with various companies, including Shell Minerals, Noranda Exploration, Northgate Explorations, Westminer Canada and SOQUEM, where he was Regional Manager for Northern Quebec. On May 1, 1996, Mr. Archer joined Virginia Mines as Vice-President of Exploration and Acquisitions and Director. Mr. Archer was actively involved in the discovery and development of the Eleonore project, from the preliminary field campaign through to the sale of the deposit to Goldcorp. In November 2014, he joined Osisko’s management team following the Osisko/Virginia merger. He was elected President of the Quebec Prospectors Association in 1996 and 1997. Over the years, Mr. Archer has received, on behalf of Virginia, several prestigious prizes, including the Bill Dennis Award from the PDAC in 2006 for the discovery of the Eleonore deposit.

Annie Dutil is a member of the Quebec CPA Order and is Nomad’s corporate controller. Ms. Dutil brings over 15 years of extensive mining knowledge, specifically in the areas of public accounting, compliance with financial information obligations and regulatory matters. Prior to joining Nomad, Ms. Dutil has held a number of positions at PwC, including a role as director where she has led the Capital Markets and Accounting Advisory Services group in Montréal. In her current and previous roles, she has assisted several companies in their capital markets activities, including initial public offerings, financings, cross-border transactions and complex accounting and regulatory matters. Ms. Dutil is the co-founder of the Montreal chapter of Women in Mining and is involved in many community and philanthropic activities, currently serving as a member of the Board of Directors of Factry, the School of the Creative Sciences, and Théâtre de la Banquette Arrière.

Mr. Jean des Rivières holds a Bachelor of Science degree in Geology from Université du Québec à Montréal and a Master’s degree of Science in Geology from École Polytechnique de Montréal affiliated to the University of Montreal. He has over 35 years of diversified experience in the exploration and mining industries while working in more than 50 countries touching base and precious metals. He most recently held the position of global Vice President Metals Exploration at BHP and previously held managerial and technical positions at Rio Algom, BHP, and Noranda. With BHP, Mr des Rivières chaired the Inclusion and Diversity committee of the Americas. After a successful career, he recently joined the board of directors of First Majestic Silver Corp., Montero Mining and Exploration Ltd., and Midland Exploration Inc.

More than 10 years of experience in mineral exploration in Quebec.

Project geologist for Midland Exploration, Jean-François holds a PhD from Université du Québec à Chicoutimi in Mineral resources, specialist in zinc-bearing mineralization with an expertise in metallogeny of metalliferous deposits.

More than 30 years of experience in mineral exploration in Quebec, British Colombia and Dominican Republic.

Project Geologist for Midland Exploration since 2012, Richard holds a Bachelor degree in Resources Geology from Université du Québec à Montréal. Before joining Midland’s team, he was a Project Geologist for Services Technominex – Aurizon Mines, Sirios and Unigold on several gold exploration projects. Between 1997 and 2006, he worked has a Project Geologist (5 years) and Technical Director (4 years) for the Nunavik Mineral Exploration Fund. At the beginning of his career, Richard worked as a Prospector for SOQUEM, Virginia Gold / Barrick Gold on gold projects in James Bay and Northern Quebec. He was also involved in the exploration of the Eskay Creek discovery in British Colombia.

More than 10 years of experience in mineral exploration in Quebec.

Project geologist for Midland Exploration, Louis-Philippe holds a Bachelor’s degree in Geology from Université Laval. Prior to joining the team, he worked 4 years for Nemaska Exploration / Monarch Resources / Nemaska Lithium in the Nemiscau area where he managed and participated exploration campaigns for lithium, gold and base metals. He also participated in the development of the Whabouchi lithium project.

Trainee geologist for Midland Exploration, Romain Deflin holds a degree in geological engineering from l’ENSG (École National Supérieure de Géologie in Nancy) and a master degree in Mineral Resource Exploration from Université de Lorraine. He completed a 4 months internship with Midland before joining the team permanently in 2019.

More than 20 years of experience in mineral exploration in Québec, Canadian Arctic, and Dominican Republic.

Project Geologist for Midland Exploration since May 2019, Philippe holds a Bachelor degree in Geology and a master in Earth Sciences from UQAM (Université du Québec à Montréal). Before joining Midland’s team, Philippe worked as an Exploration Geologist for Goldcorp, Ressources Sirios, Unigold and the Nunavik Mineral Exploration Fund (NMEF). At the beginning of his career, he also worked as an assistant geologist and a geologist for Virginia Gold Mines, Cambiex, Miramar Mining, Noranda Exploration, SOQUEM and Services Miniers du Nord on gold and base metals projects, mainly in James Bay. Moreover, he was at the origin of the discovery by prospection of the Cheechoo deposit in James Bay in 2010.

More than 20 years of experience in mineral exploration and research in Quebec.

Sylvain Trépanier holds a Bachelor’s degree in Geology, a Master’s degree in Earth Science and a Bachelor’s degree in Computer Science and Software Engineering from Université du Québec à Montréal. Sylvain began his career for Noranda in 1995 and worked on various projects in Quebec until 2001. From 2004 to 2012, he worked has a research geologist at CONSOREM. During his years working at CONSOREM, he has carried out numerous research projects applied to mineral exploration and has developed expertise recognized in Quebec in various fields related to exploration: lake-bottom, streams and tills sediments geochemistry, alterations lithogeochemistry, statistical data processing and potential mineral evaluation by artificial intelligence. He is the author of several scientific articles, research reports and public presentations. He designed and developed the Lithomodeleur software for geochemistry treatment, which is now widely used in Quebec by exploration companies, governments and universities. From 2012 to 2016, he worked for Virginia Mines and Osisko Gold Royalties as a Senior Research Geologist and was involved in most of the company’s projects in James Bay and the Labrador Trough. He is co-recipient of the QMEA Jean-Descarreaux Award in 2011 with the CONSOREM team. Mr. Trépanier joined Midland in November 2016 as a VP Exploration James-Bay/Northern Quebec.